A Brief History of the University 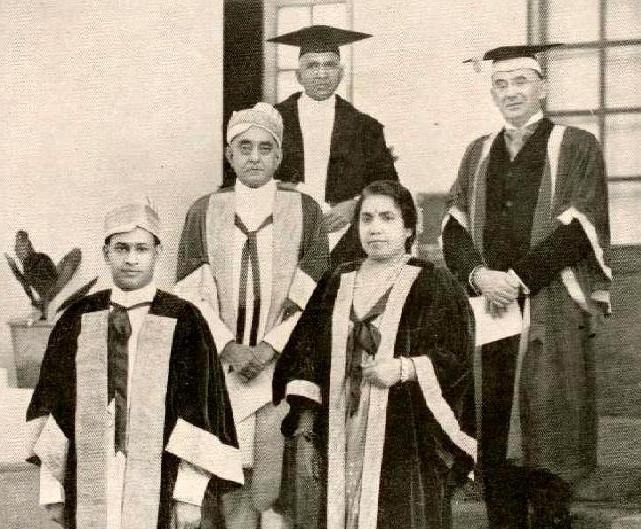 The Founder Chancellor along with Pro-Chancellor, VC, PVC and Registrar

The University of Travancore was established in 1937 by a promulgation of the Maharajah of Travancore, Sri Chithira Thirunal Balarama Varma who was also the first Chancellor of the University. Sir C. P Ramaswamy Ayyar, the then Diwan (Prime minister) of the State was the first Vice-Chancellor. He was an eminent scholar and an able administrator. It is said the Government made an unsuccessful attempt to invite Albert Einstein to be the first Vice-Chancellor. The University was modelled after the best Universities of the United Kingdom, and even today retains some of these features. The affiliating system of the University however evolved to be different from the college system in British Universities.

At present, the University has sixteen faculties and forty one departments of teaching and research in addition to study centres and other departments. Teaching, Research and Knowledge extension are the mandate of the Departments. They primarily focus on post-graduate (masters) programmes, MPhil programmes (1-year research degree) and doctoral research. In 2007, the University awarded over 100 PhDs. (University's research activities are also going on in select affiliated colleges and other recognised research centres in and outside the state). The University has had in its faculties eminent scholars who were trained under legendary figures (Sir C V Raman's student in Dept of Physics, Prof S R Ranganathan's student in Library Science and Prof Benjamin Bloom's student in Dept of Education). Some of the faculty members themselves were legends, such as famous poet K Ayyappa Panciker, Oriental scholar T Ganapathi Sasthri etc. The total number of full-time students in the University Departments is above 2000 including research students and a modest number of foreign students. The Institute of Distance Education offers a number of under-graduate and post graduate programmes which cater to more than 7000 students, all over the country and abroad.

The University has also a number of study centres in specialised areas such as Nano-technology, Kerala Studies, Bioinformatics, Womens Studies, Learning Difficulties, Sree Narayana Studies, Gandhian Studies etc. Some of these centres have taught programmes (Certificate/Diploma/Masters/Mphil) and many offer PhD programmes. The University has also established 10 University College of Teacher Education (UTEC) and 8 University Institute of Technologies (UIT) both of which offer under-graduate programmes (BEd in UTECs and BSc Computer Science/IT, Electronics/BBA in UITs), although masters programmes are available in select UITs. The University College of Engineering at Karyavattom offers Engineering Education at Undergraduate level. These institutions together have student strength of more than 5000. 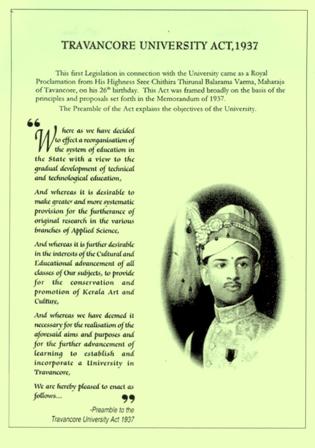 The University follows the Choice based credit and semester system for all post-graduate (masters) programmes and is in the process of introducing this at under-graduate (bachelors) level. Semesters typically fall during the months of Aug-January and February-July.

The University has a very democratic system of functioning. Its supreme bodies - Senate and Academic Council have large number of elected members and students are represented in both. The executive body of the University, the Syndicate also has a student representative in it (for the first time in Indian Universities, in 1977). The University policies are aimed at student empowerment in every field. The University Union is an active presence in the University life since 1939. To serve the students who are away from the head-quarters at Trivandrum, University Study Centres have been set up with UGC assistance, at Kollam, Alappuzha and Pandalam. Besides these, there are 13 Taluk Information Centres. The University also supplies information to students through the Help-desks in affiliated colleges. The Co-ordinator of the National Service Scheme Programme and the Director of the Student Services organize youth welfare activities with the active co-operation of the University Students' Union. The University bagged the Indira Gandhi National Award for the best NSS activities in 2005. Department of Physical Education of the University nurtures sports among students. It has gifted to the country outstanding sportsmen and women. The University stadium in the heart of the city has a world-class synthetic track. The University has a Main Library built in near its city campus and caters to all students, staff and public. In addition to this Karyavattom campus has a Campus Library. Department libraries and College libraries complete the information service to students.

In addition to Depts, Centres and Affiliated colleges, the University has a number of other institutions under it. The Academic Staff College set up with aid of the University Grants Commission, offers in-service courses to teachers in higher education and has trained over 15,000 teachers all over the country. It has been repeatedly rated as the best in the country. The Centre for Adult & Continuing Education (CACEE) aims at 'further education of the educated' for which it received UNESCO- NLM award for literacy in 2005. The Department of Publications, one of the oldest Departments of the University, has brought out several noteworthy publications including Saraswathi Kantabharanam, a treatise on Sanskrit Grammar, the five volume Kerala Sahitya Charithram by Mahakavi Ulloor S. Parameswara Ayyar and Sahithya Nayakanmar (Men of Letters) Series, Chitra Ramayana, based on palm-leaf manuscripts and the recent English and Malayalam translations of Hortus Malabaricus, the classical treatise on the plant wealth of Asia and the tropics. A massive Malayalam Lexicon is attempted by the Lexicon Dept. Seven volumes of the proposed eleven-volume Malayalam Lexicon have been released so far and the editing work of the remaining four volumes is progressing. The University Computer Centre, which has a long history (back to the use of a Czech made Electro-Mechanical Computer Arithma in 1950s and Core-Memory based IBMs and Indian made TDC in 1970s), today spearheads the University's e-Governance initiatives. Computing support for research is no longer centralised, with the advent of affordable desk-top computing power. The University's main campus in Karyavattom is firmly connected to the cyber highway with broad-band connection flowing into hundreds of computers. The university web site has also evolved since 2000 to become an indispensable cyber forum that connects the university community and serves information to all stake holders.

Here are some of the unique facts about the University of Kerala: